Thailand is a safe country, but there are some dangerous animals that you should know better to know how to react in case of an encounter. Thailand has more than 160 species of snakes, and about 50 are poisonous.

Encounters with snakes are not uncommon, especially in the countryside, but are generally accident-free.

The snake is deaf, but it feels vibrations, so when you walk in a dangerous area, such as in tall grass, tap your foot to signal your presence.

In case of a meeting, keep calm and stay away, make sure you know that the snake is as scared as you are and will look for the best way to escape.

In Isan (north-east of the country), it is customary to repeat “chok dee” (good luck) several times in case of a meeting.

In case of a bite:

. Clean and disinfect the wound with an antiseptic (hydrogen peroxide, Betadine, Dakin).

. Never use alcohol or ether, which are ineffective on most bacteria in the mouth of snakes. These products promote the spread of venom.

. Remove all potential tourniquets, such as rings and bracelets, so as not to interfere with vascularization if the swelling spreads.

. Loosely adjust a crepe bandage, thus blocking the lymphatic circulation used by the venom to spread, without compressing the blood circulation.

. If necessary, place a splint to immobilize the limb and provide some pain relief.

. If possible, apply ice wrapped in a cloth.

. The analgesic effect is immediate, and the edema is prevented.

. Gather as much information as possible about the snake, it’s color, the circumstances of the bite, the appearance of the venom, the evolution of the wound… to report to the emergency medical team as soon as it arrives.

Not to be done!

. Incise the wound, at the risk of increasing the contact surface between the venom and tissues, promoting the risk of necrosis and superinfection.

. Sucking the wound is unnecessary because the toxin is located in the hypodermis, and this act is dangerous for the rescuer if he has oral lesions.

. Give a drink known to increase the heart rate: alcohol, coffee, tea, exciting…

Inject serotherapy outside a hospital ward because of the risk of allergy. Scolopendra is a crawling insect that likes to hide in shoes or bags and bites when it feels threatened.

Its bite is not fatal (except sometimes on children), but it is extremely painful and can cause pain for several days.

When you are in the country, check your shoes before putting them on and make sure to close your bags tightly and be even more vigilant when it rains.

In case of a bite:

. You can clean the wound and disinfect it with an antiseptic

. If the bite involves a child or an allergic person, it is better to consult a doctor.

Video: a Scolopendra that stings

To show you how they cling to the skin:

Don’t try to do the same! As mentioned above, the bite is extremely painful, to make this video they probably removed the venom. At my first meeting with a scorpion, I was scared, but then it was explained to me that the injection was not fatal, just painful.

Also, the scorpion is often paralyzed by fear in case of an encounter, and it is very easy to catch it by the tail, with the hand or a stick.

The most dangerous would not be the biggest blacks but the little whites.

Finally, they are not very dangerous, but they do sting if you walk on them without realizing it.

In case of a sting:

. We need to disinfect the wound.

. Go to the hospital in case of allergy 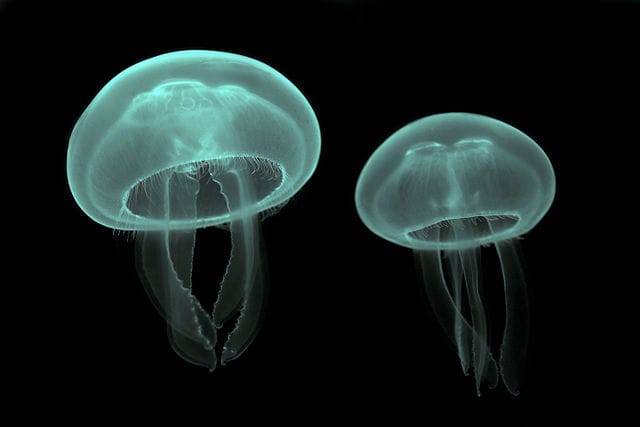 Every year, jellyfish kill people on the beaches of Thailand, their stings, which are usually very painful, can be fatal.

Avoid swimming in overcast weather, as this is where you are most likely to encounter them, they avoid the sun.

In case of a sting:

. Put vinegar on the wound

. Depending on the severity of the injury, consult a doctor It may be the smallest on the list, but it is the one that causes the most damage, a vector of several diseases, such as malaria, Japanese encephalitis, dengue fever, chikungunya, and Zika.

See :
Dengue fever can be treated with papaya leaf juice!

It is not uncommon to find large spiders in Thailand, and sometimes they bite, but it is very, very rare.

They are especially scary but not dangerous, or at least not all, and there are only three spider bites per year in Thailand. In general, it is not dangerous, but it can sometimes be aggressive if the female protects her eggs or if you try to catch it.

According to friends, his bite can hurt, so be careful!

Say no to pictures with a Gibbons baby