Jim Thompson’s house in Bangkok is a small haven of peace, nature, and beauty located in the heart of the Thai capital.

A visit not to be missed for lovers of tropical gardens, traditional Thai architecture, silk, and Southeast Asian art.

Born in Delaware in 1906, Jim Thompson was an officer in the United States Army during the Second World War and a secret agent for the OSS (the ancestor of the CIA).

He left the army and moved to Bangkok in 1946, but he remained a secret service agent until the end of his life (he died on a mission).

He was a multi-faceted American: a former architect, a retired army officer, a spy, a silk merchant, and a famous antique collector.

In 1967, at the age of 61, Jim Thompson was in Malaysia, going for a walk in the surrounding jungle and he was never seen again.

His disappearance will be the subject of many theories.

Thompson’s achievements during his 25-year stay in Thailand earned him a great reputation, and with his mysterious passing, he became a legend.

After his death, his house came under the control of the James HW Thompson Foundation, under the royal patronage of HRH Princess Maha Chakri Sirindhorn.

The role of the Thai silk industry 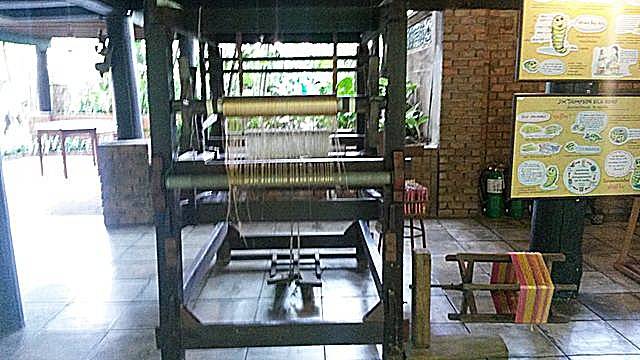 Jim Thompson noted the decline of traditional handmade silk-making techniques in the face of competition from cheap foreign clothing.

He decided to remedy this situation, and in 1948, he joined forces with George Barrie to found the Thai Silk Company Limited.

The firm made a significant breakthrough in 1951 when designer Irene Sharaff used their Thai silk fabrics for Rodgers and Hammerstein’s musical The King and I.

For his contribution to the development of Thailand’s silk industry, Jim Thompson was awarded the Order of the White Elephant, a decoration given to foreigners who have rendered exceptional service to Thailand.

After his move to Bangkok and the creation of the Thai Silk Company Limited in 1948, Thompson also became a major art collector from Southeast Asia, which at the time was not well known internationally.

Attracted by the subtlety of Asian art, he has assembled an extensive collection of Buddhist statues and traditional Thai paintings made of wood, cloth, and paper illustrating the life of Buddha.

He collected secular art not only from Thailand but also from Burma, Cambodia, and Laos, frequently traveling to these countries to buy new objects.

Its collection also includes white and blue porcelain from China, which appeared in Thailand around the 16th and 17th centuries. In 1958, he began what was to be the culmination of his architectural success, the construction of a new teak house to showcase his works of art.

Using parts of old country houses, sometimes a hundred years old, he managed to build a masterpiece that involved the redevelopment of six Thai houses in his estate.

Most of the houses have been dismantled and brought by the river since Ayutthaya, but the largest, a weaver’s house (now the living room), came from Bangkrua (located just opposite, on the other side of the river).

Jim Thompson’s house is located on a 1,600 m2 lot and is surrounded by beautifully landscaped gardens.

Jim Thompson loved this lush tropical jungle landscape in the heart of the city that gives the house its unique appeal. If you like traditional Thai houses, you can also see our article:
Thai traditional houses museum in Chiang Mai

You have to take off your shoes and leave your bags in a locker at the entrance.
Photos are not allowed inside buildings.

On arrival, you will be taken in charge by a hostess in traditional costume for a guided tour of the main house.

Then you can continue the walk at your own pace, visit the other houses to discover the rest of the collections, and walk through the lush tropical garden.

It is necessary to count, with the guided tour which is included in the price of the ticket, about 2 hours to see all.

You can also sometimes attend traditional dance performances and demonstrations of silk spinning.

You can eat delicious dishes in the restaurant or have a drink on the terrace of the bar on the edge of a beautiful lake.

A shop offers you high-quality silk products, such as cushions, shirts, scarves, etc., from Jim Thompson’s silk shops, which are still in operation. Located in the center of Bangkok, it is easily accessible by car, taxi, Tuk Tuk, or via the Air Metro (BTS).

For the metro, you have to get off at the National Stadium station.

Signs will indicate the exit to the house, which is just 200 meters from the station.

Jim Thompson House is located on Soi Kasemsan Song, across from the National Stadium on Rama I Road.

Video of a visit to Jim Thompson’s house Mahanakhon SkyWalk: walking in a vacuum on the highest building in Thailand 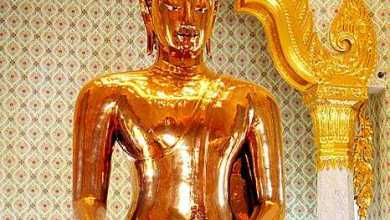 Ancient City, Thailand’s most beautiful monuments in a park 18 things to do in Chiang Rai, northern Thailand