The most important fruit carving competition took place in Bangkok on Friday, August 4, 2017, the opportunity to review this magnificent tradition.

The origin of fruit and vegetable carving

The origins of fruit and vegetable carving are disputed.

Some say that this art began in Japan in ancient times, others think it is in Sukhothai, in Thailand, 700 years ago, while others still affirm that vegetable sculpture originated in the time of the Tang dynasty ( 618-906) or the Song dynasty (960-1279 BC) in China.

For the Festival of Lights, the rafts are individually decorated with many objects, including banana leaves and flowers.

In 1364, one of King Phra Ruang’s concubines, Nang Noppamart, wanted to create a unique decoration for her raft.

Nang would then have had the idea of sculpting vegetables to make them into a flower and a bird and his raft would have been very successful.

King Phra Ruang, impressed by the grace and beauty of the sculpture, then decreed that every woman should learn this new art.

In central Thailand, people traditionally used a banana stem to decorate a coffin before cremation.

These banana stems are cut by artists and it has become an art form known as Thaeng yuak.

Over the centuries, interest in this art has declined.

In 1808, King Rama II was very fond of fruit and vegetable carving , an art that inspired him to write poems.

Today the art of fruit carving is taught from the age of 11 in primary and secondary schools in Thailand.

It is an economical and easy way to train in the art of sculpture and it is also a tourist attraction.

You can follow fruit carving courses during your travel to Thailand.

Competitions are organized every year in Thailand.

The last one was held on August 4 at Bangkok in honour of the Queen of Thailand’s birthday, which is also Mother’s Day and will take place on August 12.

Dozens of Thai artists participated in the famous competition.

More than 20 teams have carved owls, elephants or complex Thai motifs on fruits such as taros, melons or papayas.

Video of the 2017 fruit carving competition in Bangkok

See also: The 14 best fruits in Thailand with Thai name

Dengue fever can be treated with papaya leaf juice!

When to go to Bangkok and 6-day weather forecast

Thai Wai: how to greet, thank and show respect in Thailand 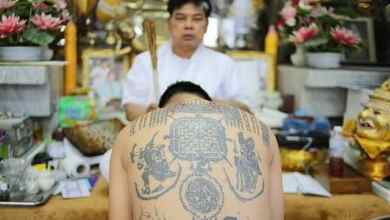 Guide for foreigners living or traveling in Thailand