Phuket Tourist Guide for the island which with its tropical climate, its magnificent landscapes, its paradisiacal beaches, all the activities proposed (diving, climbing, paragliding…) and its nightlife enjoys great popularity as a travel destination.

Contents hide
1 Description
2 The climate
2.1 When to go to Phuket
3 Geography
4 Regions
5 To see and do in Phuket
5.1 Beaches, nightlife, and shopping
5.2 Many activities
5.3 The vegetarian festival
5.4 Gibbons Rehabilitation Centre
6 Finding a hotel in Phuket
7 Transport to Phuket
7.1 Getting to or off the island
7.2 Traveling to Phuket
8 The history of the island
8.1 Symbols
9 Photos of Phuket
10 Video
11 Phuket maps
11.1 Single map of the island
11.2 Google Map

See also:
The ten most beautiful beaches of Phuket

The island of Phuket (in Thai: เกาะภูเก็ต), which is also a province, is the largest island of Thailand, it is located 867 km south of Bangkok, the capital.

The population is a melting pot of Buddhists, Thai-Chinese, Muslims and sea gypsies, the Mokens.

The majority of the population in rural areas is Muslim.

The island enjoys a delightful climate; it is hot and humid all year round.

The warm season is generally considered to run from March to early May, the rainy season from May to October.

When to go to Phuket

The inhabitants consider the period from November to February to be the “cool” season; it is the preferred tourist season, the high season.

The island is located in the Andaman Sea in the west of the Malay Peninsula.

It has a mountain range aligned from north to south.

The highest peak rises to 529 m above sea level at Mai Tha Sip Song (which translates as the twelve canes).

70% of the island is still covered by forest, including a beautiful primary forest that is rarely visited by tourists.

The western side has several beautiful sandy beaches, while on the east coast they are muddy.

Laem Promthep is the southernmost point of the island; it is trendy for its sunsets.

This region is the most famous for the whole world.

There is a wide variety of beaches, some of which are full of visitors every year.

Patong is one of the most famous places to celebrate in Asia.

Southeast of the island

This part has some beaches that are worth a visit.

Chalong Bay is the largest city; it acts as a port for ships coming from Phang Nga Bay.

In addition to the city of Phuket, the interior of the island is rarely visited by tourists.

Phra Taew National Park is an excellent escape from the crowds of tourists.

To see and do in Phuket

The island is mainly visited for its beaches and nightlife.

Patong Beach is the place where most of the nightlife is concentrated and is also the cheapest shopping center on the island.

There are many activities to enjoy on the island:

Bungee jumping, karting, quad biking in the jungle, climbing, paramotor, paragliding, tree climbing (a popular activity that consists of moving around with cables, from tree to tree), pulling at the AK47, horse riding on the beach, golf and many others…

See our article :
What to do in Phuket, the 10 activities not to be missed

Impossible to be bored!

This festival takes place every year during the ninth month of the Chinese lunar calendar, usually at the end of September or beginning of October.

Participants consume strictly vegan food for ten days to purify themselves and participate in sacred parades and rituals where they walk on fire and pierce different parts of their bodies with various objects!

See :
The vegetarian festival in Phuket and throughout Thailand

In Thailand, the wild Gibbon population has suffered terribly from baby poaching, the execution of mothers and domesticated Gibbons who are abandoned or killed because they become aggressive as adults.

The Gibbons project in Khao Phra Thaeo National Park, near the Bang Phae waterfall, aims to save the Gibbons that have been abandoned by relearning them to live in a wild environment.

You can contribute to the success of this Rehabilitation Project by buying T-shirts or making donations.

You can also participate in the volunteer program.

To know more about it, see our article:
Refuse to have your picture taken with a Gibbon baby in your arms

Finding a hotel in Phuket

You will find the best quality/price ratio by comparing the offers of the largest platforms through our partner: Hotels in Phuket on Hotellook

The island has an international airport and a bridge that connects it to the rest of the country, given the region’s success with tourists, there are plenty of ways to get there!

You can get an idea of the price of transport by boat, bus, train, plane or book your tickets with 12go.asia

Getting to or off the island

The international airport is located 30 km north of the city, Phuket-town.

You can find the lowest prices for long haul flights to Phuket by comparing by a period with Jetradar.

Most buses to the island will drop you off at the Phuket-town bus station, from there you can find buses or taxis to reach the island’s various beaches.

From Hua Lamphong Station in Bangkok, you will need to take a train to Surathani, the southernmost station in the country, from there you can then find buses to reach the island. It is a quick and economical way to get around the island; if you have a large backpack, you can ask the driver to take it between his legs. 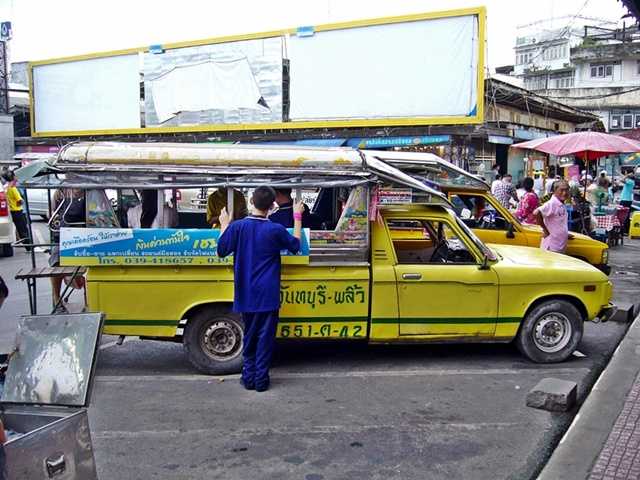 Songtaew means two benches (song = two; taew = bench); they are equipped pick-ups. An economical way to travel between the different squares of the island

Taxis are no longer allowed to take customers away from the airport; the tuk-tuk mafia controls the market.

Tuk-tuks do not have a good reputation on the island, inflated prices, scams, they are the subject of many complaints.

Unfortunately after 5 pm, they are often the only alternative to travel in tourist areas.

Renting a car or motorcycle

You should check the condition of the car or motorbike before renting; if there are already scratches, you can take pictures of them to avoid any scams.

You will find scooters for rent by the day for 150 baht in low season and up to 400 baht in high season.

See also:
Transport in Thailand, travel to the land of smiles.

The history of the island

The island was known to Europeans from the 16th and 19th centuries as Djonkseylon; its Siamese name was Koh Thalang (Thalang Island).

The island, known for its wealth of pewter, attracted the lusts of foreigners. In 1685, the French succeeded in obtaining a monopoly on the tin, but in 1688, they were forced to leave Siam.

In 1785, navigator Sir Francis Light passed by the island and warned the local administration that the Burmese army was preparing for an attack.

Kunying Jan, the wife of the governor of the island who had just passed away, and his sister Mook decided to react and gathered all the forces on the island.

The two sisters and their armies bravely resisted the Burmese who, after a one-month siege, were forced to retreat on March 13, 1785.

Since then, the two women have become local heroines, receiving from King Rama I the honorary names of Thao Thep Kasatri and Thao Sri Sunthon.

In the 1820s, the exploitation of the precious tin was finally entrusted to Chinese traders.

During the reign of King Chulalongkorn (Rama V), the island was the administrative center of tin production.

In 1933 the island became a province.

On December 26, 2004, the west coast of the island was hit by a terrible Tsunami caused by an earthquake in Indonesia, in memory of this tragedy, a memorial was built on Patong Beach.

The provincial tree is Burmese rosewood (Pterocarpus indicus), and its flower is pepper flower (Bougainvillea sp.).

Attractions and things to do in the island:

Single map of the island

You can find more maps here:
Maps of Phuket Island

Koh Phangan Island in the Gulf of Thailand: Tourist Guide

Chiang Rai: travel guide to discover the city and its surroundings