Wat Arun is a magnificent Buddhist temple located on the banks of the Chao Phraya River; it is one of the most visited monuments in Bangkok.

Contents hide
1 Description
2 History of Wat Arun
3 Useful information
3.1 How to get to Wat Arun
3.2 Address
3.3 Price and Schedule
4 Video: Wat Arun
5 Maps of Wat Arun
5.1 See the temple on a Google map

Wat Arun (in Thai: วัดอรุณ) owes its name to the god of Hindu mythology: Aruna, a symbol of the dawn. It is located in the Bangkok Yai district (the great Bangkok), on the right bank of the Chao Phraya river. 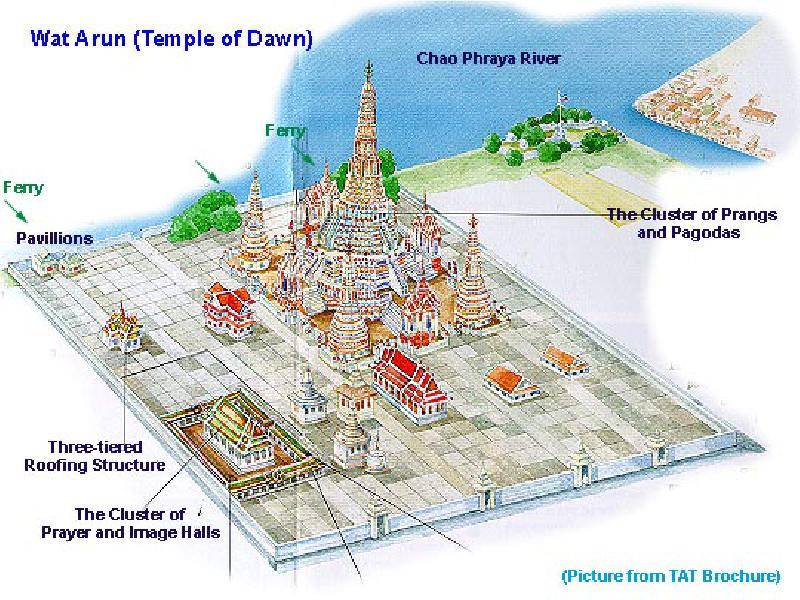 This Buddhist temple is an architectural representation of Mount Meru, the center of the world in Buddhist cosmology.

In Buddhist mythology, Mount Meru is a place that simultaneously represents the center of the universe and the uniqueness of the spirit sought by followers. Thousands of kilometers high, Mount Meru, lies somewhere beyond the physical plane of reality, in a kingdom of perfection and transcendence.

The Prang at four corners of Wat Arun, which houses images of the guardian gods of the four directions, reinforces this mystical symbolism.

The central Prang ends with a trident with seven branches, which would be Shiva’s. Before the passage of King Taksin in 1768, there was an old temple known as Wat Makok or Wat Makok Nok.

The king had the temple renovated and renamed it Wat Chaeng, the Temple of the Dawn.

Rama I will install the Emerald Buddha there before moving him, as well as the capital, on the other side of the river.

See: The Grand Palais (Royal Palace) and the Emerald Buddha in Bangkok Statues of Buddha in Wat Arun

Rama II and Rama III will build the central Prang, 85 meters high, and 234 meters in circumference.

Rama IV will have the prang covered with fragments of Chinese porcelain donated by the city’s inhabitants. Status of Buddha in front of the central Prang

The most significant restoration work on the Prang was carried out from 2013 to 2017, during which a significant number of broken tiles were replaced. 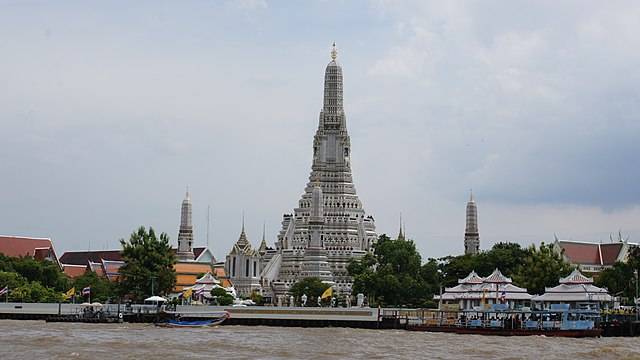 Wat Arun after restoration in 2017

Although it is known as the Temple of the Dawn, it is absolutely beautiful at sunset, especially when it is lit at night.

There are several bars and restaurants on the other side of the river that will allow you to enjoy a magical show when this magnificent pyramid of Asia lights up at nightfall. But the quietest time to visit it is still early in the morning, before the crowd. Statue of Buddha in the chapel of Wat Arun

How to get to Wat Arun

Wat Arun is almost in front of the Wat Pho, so easy to access.

From Saphan Taksin (Saphan = bridge), you can take a boat that stops at pier 8.

Small shuttle boats take you from one side of the river to the other for only 3 baht. Map showing the proximity to the Grand Palais and Wat Pho: See the temple on a Google map